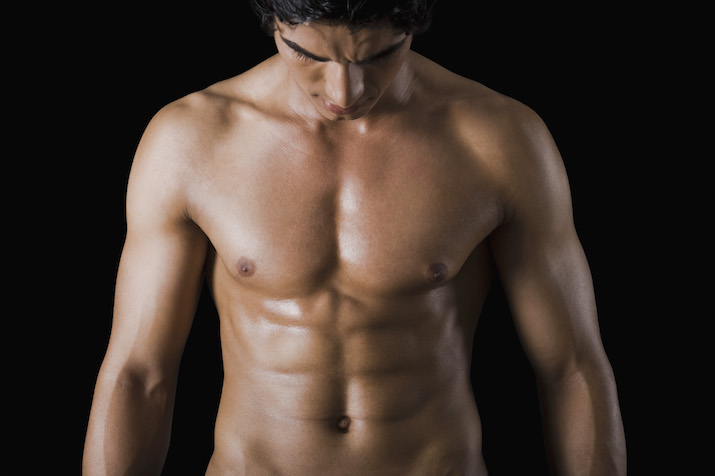 When I was around 8 years old, I remember I used to go out to the patio of our Mākaha house and watch my Dad work out. He had a pull-up bar, a couple of chairs to do dips, a bench with a barbell that had the cement blocks on each end. I remember the plastic that encased the blocks was broken and barely hung on. My Dad would kill his workouts to a mix of Bonnie Taylor (I need a Hero), the Rocky soundtrack, Bon Jovi, and Van Halen… you know, the quintessential 80’s pump track. It was in this little patio that I fell in love with working out.

Fast forward several years later and I was ready to work out on my own. I remember getting on the bench and my dad helping me un-rack the bar. The weight coming down like a literal ton of bricks. My ego was bruised more than my chest. I was amazed and confused about how my Dad made it look so easy. So I got the determination to work out just like him.

Seeing my passion for it, my Dad signed up for a monthly subscription to Muscle & Fitness.

I was blown away by the physiques of these man-gods and warrior-queens. They literally looked like superheroes come to life. Arnold, Lou, Haney, McLish, Chizevsky, Zane, and many others had me determined to be just like them. All through my teens, and pretty much up to my early 30’s, I thought I had to be lean and have the six-pack abs in order to be “healthy” and to be taken seriously as a trainer. But what I have learned recently is having a certain level of fat is actually healthy for you. The obsession to obtain the six-pack abs is actually a fairly recent (1980’s recent) phenomenon.

When did the obsession start?

It’s hard to pinpoint exactly because sculptures of naked, godly physiques date all the way back to 600 B.C.E. in ancient Greece. Although, most artworks around the world had their heroes clothed in warrior attire so it is hard to tell if a well-maintained physique was “in fashion”. It is known, though, throughout most civilizations around the world, ripped physiques were attributed mainly to the commoner or laborer and viewed as “undesirable” because more than likely you were poor. Voluptuous and heavy figures were a sign of wealth and looked at as more “desirable”. I say “most civilizations” because most of human history we were not, by certain standards, civilized. Most of our Homosapien history had us lean and mean from constantly hunting and migrating.

A strong, mobile, healthy body (not necessarily shredded) would be the most desirable as it would ensure good genes to be passed on.

You do not see much nude, ripped bodies in art during the Dark Ages (roughly 400 AD – 1400 AD) as it was viewed as a sin to show the naked body. During the Renaissance Era, though, six-pack abs can be seen on the figures of “The Creation of Adam” in the Sistine Chapel and on the “David” statue, both by Michelangelo. Leonardo Di Vinci’s “The Vitruvian Man” sported a nice set as well, as did Donatello’s own “David” statue. For nearly 300 years, it was all the rage around Europe and like that, it kind of faded away.

Photography became more in fashion around the mid-1800s and again people are fully clothed. This holds true all the way until the boom of Hollywood movies in the 1950s. One of the first popular “action” stars was Steve Reeves, who was the first to bring Hercules to a big screen in Hercules Unchained. Reeves, who was a professional bodybuilder during the ’40s and ’50s, had the height and physique to bring the demigod to life. I bring this part up because Steve Reeves was a big reason Arnold Schwarzenegger got into bodybuilding himself. Ironically, 10 years later he would play the role of Hercules as well. Still, during this time, ripped bodies were not something people were lining up to see at movie theaters or buying off of magazine shelves.

The ’80s saw a boom in media and television, which came on the heels of the 1970s disco/party culture. MTV was introduced, we also saw the rise of 24-hour news coverage, and the world was never the same. To fill the in-between, commercials and music videos became as popular as movies and with it, magazines like Cosmopolitan, Muscle & Fitness had a boom in this era.

Why? Hard to say. It could be that the baby boomers of the ’60s were now grown up and in control of major media corporations and movie studios. You could also make the argument that the ’80s was a rebellion to the ’70s. The same as the ’70s were to ’60s and so on. One potential reason for the shift in perception could be because society was now being flooded with images of celebrities on a wide spectrum and in order to satisfy that dopamine dump, we now wanted to see (or so we were told) more “godly” physiques with less clothing.

With all that being said, I don’t think the world was really ready for the phenomenon that was Arnold Schwarzenegger. Conan, The Terminator, Red Heat, Predator, Twins, the world could not get enough of the Austrian Oak. It’s hard to pinpoint why Arnold had such an effect on our social consciousness. Why he was in such high demand given his accent, long foreign name, and according to his words, being too big and muscular for Hollywood. Again, I believe the ’80s was a “middle finger” to the ’70s but I also think because of MTV, and the wide array of artists from around the world on our TVs, allowed us to be more accepting of those who were “different”.

From here, you can draw a straight line to where we are today. Arnold was the catalyst that changed how we see our physiques. He took bodybuilding from an underground sport to what we know it today. Even celebrities like Stallone, Ford, Gibson, changed their physiques to meet the demand of movie-goers. Arnold even had an effect on sports like basketball and baseball, which had their athletes now lifting weights like a bodybuilder. Now, you can look at the ’90s and see it as their “Nevermind” to the ’80s, as the men and women became more socially aware and beauty standards were shifted to more “down-to-Earth” but the residual effects of the ’80s can still be felt to this day.

In the early to mid-’90s, I can remember my mom buying cases upon cases of Slim-Fast meal replacement shakes. Our house was full of “fat-free” products. I can still taste the watery-ness of skim milk. We all thought that fat was bad and that cutting it out would help us obtain the physique we all saw on TV and in magazines. So where did the lie start? Well, the simple explanation is that the food industry, back in the 1960s, wanted to peddle their product to us en masse so they paid off several Harvard scientists to say that “fat was bad for your health.” Knowing anything that was less in fat content would taste horrible, the food industry spiked those products with refined sugar, which in turn got us addicted to that product.

These lies might’ve continued if not for whistleblowers in the medical and food industry. This helped the author Gary Taubes write his books, “Why We Get Fat” and “The Case Against Sugar”. We now see the collective shift back toward fat-heavy diets like paleo or ketogenic. Although there are still the dogmatic institutional beliefs that fat will kill your heart and make you less healthy.

What’s been most troubling is there are doctors and other health professionals that have built their careers on the idea that “fat is bad”.

So instead of accepting the new information and helping the discourse, they will double down. They will try to discredit anyone who says otherwise. Fortunately, platforms like YouTube, Instagram, and podcasts have allowed these once fringed voices to come into the light.

Personally, for me, I discovered in 2012 the benefits of intermittent fasting. It was through books like “The Warrior Diet” and “Engineering The Alpha”, which lead me to Joe Rogan’s podcast. From there it leads me to common sense health professionals. Some examples would be Rhonda Patrick, Shawn Baker, Peter Attia, Robb Wolfe, Paul Saladino. In turn, it leads me to health enthusiasts like Ben Greenfield, Aubrey Marcus, and Brian Sanders.  I could go on for days on the articles and papers I have read about the benefits of a time-restricted, high fat, low carb/sugar diet but the point of this blog is to bring your attention to a few things:

1. Your external looks do not determine the internal health

2. The issue will always be the content and volume of your calories and the amount you put out in any exercise

3. Know the difference between subcutaneous (good) and visceral (bad) fat and why it is important to have a healthy level of body fat for your age, sex, and height

While a six-pack of abs will score your likes on Instagram and the hard work is admirable, in a recent study conducted by Proceedings of the Royal Society B found that a large percentage of women did not find it attractive. Like I stated above, they found a strong, healthy body (not necessarily shredded) most desirable.  I think the question comes down to “why” do you want it. Whatever the answer, it better be strong enough to get you and keep you there.

For me, the lowest I ever got down to was 7 percent. I thought it would give me a better sense of worth and health to have those “magazine abs”. But I just found the maintenance of it to be a nuance. Plus, I felt my performance lagged in other areas of my fitness. Now I just maintain between 12 – 15 percent. I focus more on quality meals, workouts, sleep, recovery, meditation, reading, and other more important measurables that actually contribute to a healthy existence.

Whatever your goals are, make sure they are yours! Make sure they not what a magazine, TV show, IG page, or movie tells you it should be. As always I’m here to help.

The Twinkie Diet for Weight Loss

This story has come up numerous times between me and my clients, friends, and family. The experiment was conducted by Mark...

What Are Telomeres and How Do They Relate to Your Health?

When I was a kid, I remember seeing my grandmother (on my mom’s side) pulled out the entire front row of her teeth...