With the end of the previous season now a distant memory, at this stage of the summer soccer players will begin to turn their attention towards regaining full fitness for the coming season. But what does it take to reach peak physical fitness for the new season? 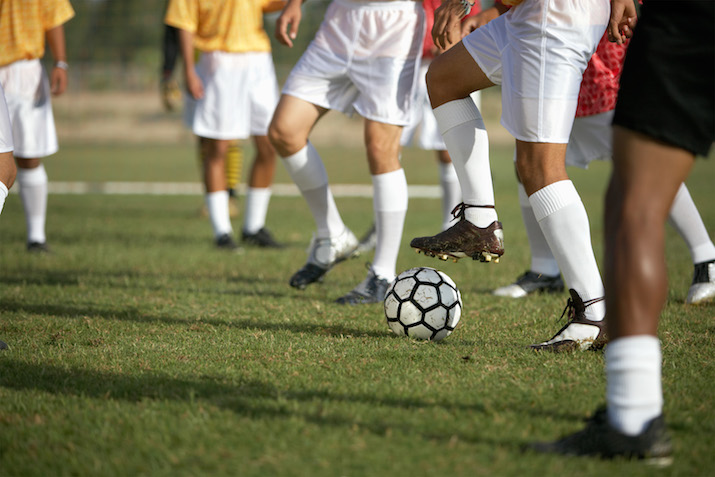 Soccer is a multifaceted physical sport requiring high level of cardiovascular fitness and sufficient development of strength variables. Soccer players do not necessarily have an extraordinary capacity in any of the areas of physical performance. A combination of technical, tactical, and physical capabilities are required for maximum success. (Statistics for this article have been taken from professional soccer teams and matches across Europe. Although the data is extracted from an elite population, there are many parallels and correlations which can be linked to sub-elite level.)

A distinguishing difference between top class soccer players and those of lesser abilities is their capability to significantly perform repeated high-intensity runs. Soccer players spend up to 11% of the game sprinting (Reilly, 2003). This represents 0.5–3.0% of effective time with ball in play.

For example, a midfielder sprints more than 1.1 km of total 10.9 km covered during the match. With this fact in mind, to improve soccer performance it would be logical to focus on improving player’s ability to perform high-intensity exercise and recover from it rapidly. To achieve this goal, a positive marriage of both cardiovascular and strength training must be utilized.

The benefits of strength training and performance enhancement are accepted these days in most circles. However, it’s essential to have a specific program designed for you and your sport. Quite simply, a stronger muscle is capable of producing more force. In turn, it can generate more power. A stronger muscle enables the player to improve major factors. There’s an increase in running economy, sprint speed, jump height, agility, proprioception. Moreover, stronger muscle significantly reduces the incidence of injury.

It’s reported, strength training improves running economy up to 4.7%. A more economic running technique enables more energy to be stored while also delaying accumulated fatigue. Soccer players rarely achieve maximum running in a match, so the ability to accelerate and decelerate are desired skills. These skills can be significantly enhanced when following a specific resistance program. The ability to slow down or speed up is dependent on how much force the muscles in the lower extremities can absorb. Increased strength in quadriceps/ glutes/ hamstrings leads to improved breaking times and increased acceleration times due to greater propulsion.

Although strength training is essential for the listed qualities above, carrying non-functional muscle can inhibit overall performance. The excess weight could reduce mobility (in terms of running ability) and diminish power as the body has a heavier load to carry. Players can develop non-functional muscle by lifting moderate loads with high repetitions.

This form of resistance training is closely associated with body building or aesthetics-based practices. This is where the myth of “lifting weights slows you down” originates from, I’m sure. Therefore, when strength training for soccer, generally the changes that are sought after are neurological. This is achieved by engaging in a resistance program with high loads and low volume. The goal is to improve the neural drive to the individual fibres in the muscle. In layman’s terms, the aim is for your brain to be able to contract as much of the muscle as achievable, consequently making the muscle as strong/ powerful/ forceful as possible. When this is successful the muscle will increase in purpose without increasing in size, thus become more functional.

As well as improving the physical performance of a soccer player, strength training is a vital tool for reducing the incidence of injury. As described in the previous paragraph, breaking and acceleration dominated the nature of a soccer match. Hence, the muscles in the lower extremities will experience great eccentric forces when a player is slowing down and speeding up. If there is not sufficient strength in these muscle groups, injury will eventually occur. A stronger muscle will be able to absorb more force/ energy before failure than a weaker one.

Countless studies have shown, the most commonly injured muscle treated while engaging in soccer is the hamstring (12-16%) (Anderson et al, 2003 & Arnason et al, 2003). One theory as to why there is a growing incidence of hamstring injuries in today’s game is due to the increased physical demands required. Today soccer teams play more games, complete more sprints, play at a higher pace, and cover more distance per game than ever before. (Note, elite players cover anywhere between 9-12 km per game). As illustrated already, strength training improves neural drive and function of a muscle which is critical for preventing injury. Optimal activation and inhibition of muscle fibers can prevent muscle tears and even more prevent the joints from injuries.

So, if we break down the key physical attributes associated with soccer (above) and aim to enhance each one, logically that will lead to overall improved performance. This is why preseason should be seen as a perfect opportunity to improve individual and team performance opposed to just a 6-week slog to get “fit”.

If you are a player, don’t you want to be able to run further anr perform increased repeated sprints? Would you like to improve muscular power, and significantly lower your incidence of injury? Conversely, if you are a coach, do you not want to quantitatively improve your team’s chances of success in the coming season?

There is no exaggeration in stating that the difference between winning a league or promotion and relegation between two teams could lie in their strength and conditioning programs. Points are won and lost based on player availability, injuries derail seasons. If the two teams of equal ability are competing, research has shown that the team that covers more distance and completes more high-intensity runs will win the game. Appropriate conditioning coupling strength and endurance training is essential for success. You will quantitatively improve your chances of having your best season yet!

I am very excited to release a 6-week strength and conditioning program. This program is specifically designed for both individual players and teams. Speaking from a personal point of view, I began this program 2 months ago as the football season in Toronto runs during the Summer months. And I can honestly say that I have never felt so powerful, lean and fit. If you are a player looking to take his football to the next level or a team aiming to kick on from the previous season, contact me!

In summary, why follow a Goals Fitness preseason soccer plan?

Diary of a Trainerize Client: An Assessment with My...
Janis Behan June 25, 2016

The First Experience with My Personal Trainer I have never had a personal trainer before. I’ve been to fitness, ...

Since last week was my assessment with my personal trainer, this week was my first real one-on-one training session. I was...

Diary of a Trainerize Client: In the Groove with Personal...
Janis Behan July 9, 2016

I’m now onto Week 2 of my personal training as a Trainerize client. I expected much of the same from last week, but boy,...