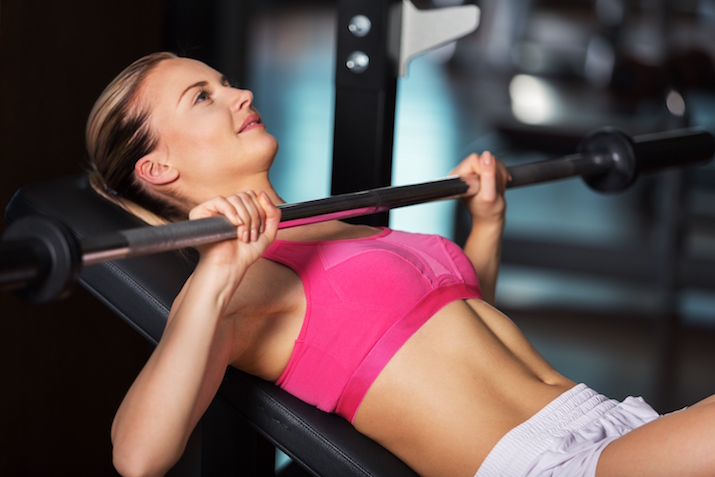 After years in the gym and trying out a number of different training styles, Daily Undulating Periodization, or DUP, has by far given me the best results – and it even makes sense from a scientific stand point. I will cover the basics of this training style and ways I have implemented it. However, there are many different ways to adapt it your training based on your individual goals. Do some research on Dr. Mike Zordos who has done hours of research on the subject.

Let me break the name down for you:

Daily, meaning every day (obviously). Undulating means change in a wave like motion (in this case your reps, sets, intensities, etc). Periodization is the training plan over time, to progressively get stronger. To put it simply, DUP training will have you training multiple times a week with different rep ranges and with various intensities. Compared to a typical hypertrophy program which focuses on lower intensities but higher volumes (3×10, 4×8, etc) DUP focuses more on the total training volume (weight lifted x sets x reps) for the entire workout.

“If your goal is to maximize muscle development, HIT simply doesn’t do the trick. You need a higher training volume. Substantially higher.”
– Dr. Brad Schoenfeld

200 pounds lifted 10 times for 3 sets is equal to 6,000 pounds of total volume. 4 sets of 6 with 250 pounds is also equal to 6,00 pounds in volume. However, now you are lifting a heavier weight that will lead to greater increases in strength in addition to producing similar hypertrophy benefits of 3×10 routine. Volume is the main factor in muscle hypertrophy and should be increased over time for optimal muscle gains. To quote Dr. Brad Schoenfeld (a leader in hypertrophy research), “If your goal is to maximize muscle development, HIT simply doesn’t do the trick. You need a higher training volume. Substantially higher.” DUP training will lead to substantially higher volume week to week than a 1 time a week bodybuilding split would produce.

Due to the fact that DUP will have changing rep ranges and volumes for each workout, it is possible to train in a hypertrophy, strength, and power range in a single week. This is drastically different from most other routines that will focus on each one of those for a period of time before shifting to the next. It is varied from a typical linear progression routine as well. Often these routines will focus on something like 3×10 for four weeks followed by 4×8 and then 5×5, and so on. Rather than split each intensity and rep range up, DUP allows you to train each in a given week. This will lead to creating a better athlete by allowing them train different energy systems and for different goals throughout the week.

An example routine would be:

The routine can be changed based on your needs for frequency and volume and individual goals. Some people may dead lift 2x a week while some will bench 4x a week. Some may also want to split their lifts up so they aren’t performing all 3 lifts each day back to back. Still others may want to vary the intensities for each lift (Monday heavy squat(85%), moderate bench (80%), light DL (70%), etc).

There really is no wrong or bad DUP routine as long as you are following the undulating rep/intensity guideline and training each body part multiple times throughout the week. Your accessory exercises will depend on your goals, week points, and muscle imbalances and can be added after your core lifts or done on a separate day (or both).

Progress should be made each week. The beginning of a training cycle should not be at max or near max levels. The goal is to hit every single rep for the entire program, not to maximally exhaust the muscle so much that reps are missed. Simple progressions of 5 pounds can be made each week. However, some auto-regulation should be included. If the weights felt extremely light then 10 pounds could be added. This decision could also be made at the gym during warm ups. If everything feels particularly good that day, then increases in weight can be made. Don’t get cocky and add too much. Remember the rule that you want to hit ALL reps to reach your goal for volume. Another way to determine progress is the use of an AMRAP (as many reps as possible) set on your heaviest day of training. For the example above the 6th set of the 85% workout would be completed for as many reps as possible. If only 4 or 5 reps were completed a small increase in weight for the next week would be appropriate while a set of 6-10, or more, would make it appropriate to add 10 pounds for the next week of training. Failure can be useful in a workout at appropriate times and is a good way to test your strength. Don’t get carried away with this method and it really should only be used by an experienced lifter. As the body fatigues with heavy weight, form break down can occur which can risk injury so be careful with this technique.

Progressions in the rep ranges and intensities from training cycle to training cycle can be made as well. This would be done by increasing the intensities used for each workout and assigning an appropriate rep range for it. A power lifter looking to peak may use 5s, 3s, and 1s for their workouts throughout the week.

Due to not reaching muscular failure each workout and not have crazy high volumes each workout session (like a bodybuilding body part split routine would). Muscular soreness should be much less than the bb’ing style of training, however it can still be expected especially as the body adapts to this style of training. Less soreness is a must when squatting, benching, and dead lifting multiple times in a given week. Increased frequency can also lead to increases muscle protein synthesis (growth/repair in the muscle) because MPS typically peaks in a muscle 24 hours after training it. The added frequency will increase MPS throughout the week.

Yes! I have personally followed this training style for 22 weeks now. After the first 4 week cycle I tapered and hit a power lifting total of 1,140 pounds. After a tough 16 weeks on this program I tested my maxes again and totaled 1,220 pounds including a 535 pound Deadlift. I weighed roughly the same (165-170 pounds) during each test day.

What do you think?
Cancel comment
3 Key Fitness Mistakes I Made Early On, That You Shouldn&...