Our trainer shares her “yo-yo” experience with pregnancy. Read about difficult yet the happiest moment in her life! 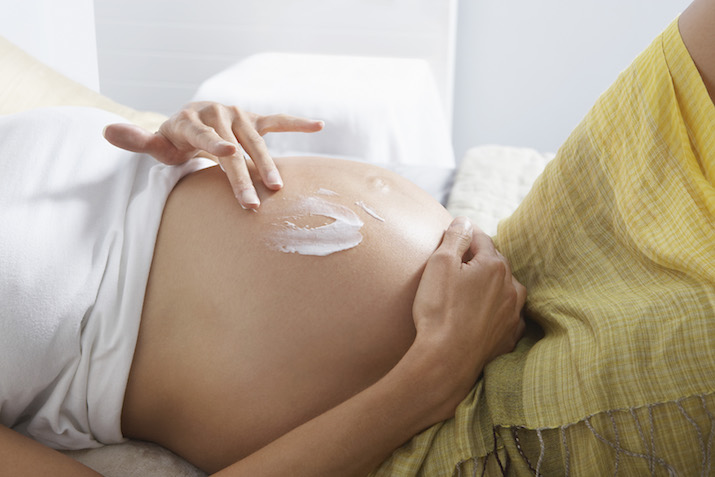 I was always going to struggle being pregnant. It was given. I have always been very body conscious. Had a very hard time dealing with the changes my body was going through. Moreover, I don’t think I ever accepted it mentally.

How I found out I was pregnant

I’ll never forget the day I found out I was pregnant. I was cleaning the house and had this sudden thought that my period hadn’t come for a while. Maybe I was pregnant? I wasn’t totally convinced because I always had issues with my mensural cycle. We have been trying to conceive for only 3-4 months. But because I was so desperate to fall pregnant and it didn’t happen straight away, I thought something was wrong. Am I infertile? Is Alex infertile? I tried all the different positions, like my legs up in the air (haha) but instead, as soon as we stopped putting so much pressure on it, voila it happened!

So getting back to my story, I thought lets just do a test, just to see. I had already one of those cheap tests from a chemist I bought a while ago. It was a two pack. I had one of the tests still left, so I thought I may as well try. That 3 minute wait after you’ve peed on the stick, had to be the longest 3 minutes of my life.

I’ll give you the mental image. I’m in the bathroom, have the stick resting on the sink. I can’t look. I’m so nervous. Palms are sweaty. The second line starts to show. I start screaming and jumping up and down on the spot. So who is the first person I call? You’d think it would be Alex right? Well no. I call my mum! I tell my mum everything, so its only natural she was going to be the first person I call (Alex still hasn’t forgiven me).

I was 6 weeks pregnant when we found out. We had conceived on a little getaway in Tassie. We went to stay down at Alex’s cousins place in Launceston on the queens birthday long weekend in June 2016. It was beautiful and even more meaningful when we found out it was that weekend.

But I have to admit, I hated being pregnant. There was nothing good about it at all. I was violently ill for the first 22 weeks of my pregnancy. I was nauseous all day, everyday. Some days I was bed ridden and curled up into the fetal position. The thoughts that would run through my head weren’t the most positive. What am I doing? This baby better be worth it! I’m fat and I waddle like a duck.

Having a hard time eating

I really struggled dealing with the fact I was putting on weight. In addition,  I don’t think it helped being in the fitness industry either. I would be so self-conscious training my clients in my uniform. All I could think was: “I bet everyone is looking at me thinking oh that trainer, needs her own trainer!”

Its hard being a motivator for others when you are left so insecure. But you have to put all of that aside and focus on your clients. Oh and the hunger!! Wowee. I knew your appetite increased, but I was like a bottomless pit! I just could not get full. But because I felt so sick all the time, all I could keep down were carbs. All I wanted was carbs. My biggest cravings were hot chips or just carbs in general. When the cravings took hold, you just couldn’t fight them until you had what your ‘baby’ craved.

The amount of times you blame the cravings on your baby is enormous! No wander I stacked on the weight. I put on a lot of weight quite quickly. I had already gained 9 kilograms in the early months. I discussed this with my shared care doctor and she was concerned with my rapid weight gain. She said: “you are only meant to put on between 12-16 kgs in your entire pregnancy. You really need to watch what you eat”. Right, lady. If you try telling a hungry pregnant woman to stop eating at 2am, you’d get your head bitten off. And I do get angry when I’m hungry.

This was the best trimester. Finally my morning sickness disappeared and my energy levels increased! I was so happy I could train hard again without my 3 naps per day. I’d never been so tired in my life like I was in the first 3 months. But around week 16 it was literally like a switch had flicked and I was a completely different person.

I lost count with the amount of times I got told from my clients that I looked tired in the first 3 months. I was finally starting to enjoy my pregnancy and I understood how other woman loved being pregnant. It was the little flutters you felt at all times of the day or when baby had the hiccups. I felt the bond with this human I was growing and shared unconditional love with baby I was going yet to meet.

I didn’t really start showing until I was about 22 weeks pregnant. I carried it everywhere really. I couldn’t wait until I started to have a bump. And you could actually tell I was pregnant and not just ate too many cheeseburgers.

I really envied those women who had that ‘glow’ about them. The only glow I got was when I got a spray tan to look a little better.

If you are planning to conceive, let me tell you something. Do not, and I repeat do not, be heavily pregnant in the middle of summer! It is the absolute worst. May I add, we also had 5 weddings at the beginning of the year where I was 32 plus weeks pregnant. You can tell we didn’t quite think that one through.

Not only was every wedding we attended 35 degrees, but one was a standing wedding with no seating! 😭 So I was not only a sweating beached whale with a waddle. But also, I had so much fluid retention that my ankles joined my feet. Yes, that’s right I had kankles. I can laugh about it now and my pregnancy experience. But I’m telling you there is nothing sexy about a heavily pregnant woman with a waddle and kankles!

The last month of being pregnant was by far the hardest. My morning sickness decided to make a surprise appearance again. Lucky me! By this stage I was absolutely disgusted in what I saw in the mirror. No clothes fit me, so I was rocking the leggings and oversize t-shirts.

All I did was complain. The easiest things were now the hardest. I had to get Alex to give me a push to get off the couch, I couldn’t reach my feet to do my shoe laces up and sleeping was impossible. Lucky it was summer, because no shoes fit except thongs at this stage. I was so over being pregnant that I literally was trying everything and anything to naturally induce myself.

I tried walking twice a day, sex (which proved to be impossible) an induction massage, spicy food, roseship tea and primrose tablets. Mentally I never really accepted the fact I was putting on weight. I stopped weighing myself when the scales had tipped to 89kgs. That was about a month before I popped. So, that means that I gained over 20kgs.

I know, every pregnancy is different and we are growing a human which everyone kept reminding me of. But being that big and not recognizing the person in the mirror was so hard to comprehend.

Here is a follow up blog which Demi can proudly call “My Successful Post Baby Fitness Journey”! Read and feel...